A Tribute To A Great Leader – Jim Stynes 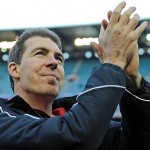 It’s quite amazing how someone you do not know personally can inspire and spark such emotion when their name is mentioned.

On the day Jim Stynes died, it really rocked people. It’s a sad day that we lost one of the true legends of not only AFL but of life. His legacy stands as tall and strong as he did. He made a real difference, a massive difference to this world and that in itself is true leadership.

So just what was it about Jim Stynes that made him a revered leader, admired by all who knew him and those who didn’t. These are just a few of Jim’s leadership traits that made him the man he was:

Jim Stynes is the epitome of leadership and his legacy will live on. He has shown how a young lad from the other side of the world can follow his dream, adopt a new homeland and make it a much better place. And Jim for that we are thankful.